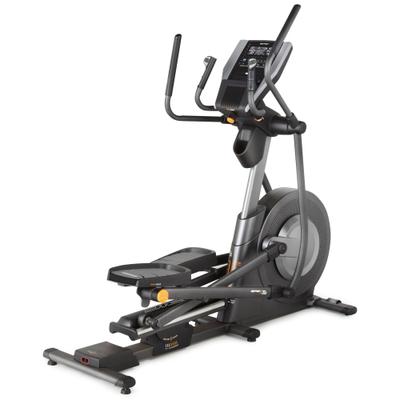 I bought this equipment at a Dick's Sporting Goods store in San Luis Obispo, CA. It was the most expensive elliptical on display and the stride length was good for me. I paid about $1,100 for it; it was "on sale" from something like $1,499. Dick's threw in delivery and assembly by a third-party company. It took a couple of weeks to deliver the equipment and the first assembler found that the console was inoperative. Dick's wouldn't cannibalize a console from their store so a new one had to be ordered. The assembling company dropped the ball in reordering a new console and it took two months before the new one arrived; a few days later a new assembler finished the initial assembly. I use an elliptical five days a week for about 50 minutes and I weigh about 215 so the stress on the machine isn't too great. Three months later an annoying squeak began and after four months the right pedal started to tilt down. I stopped using the machine and called Epic and sent emails; after two weeks I received a response. They agreed to send a technician and after I explained the problems with the machine Epic sent a bunch of parts to fix it. The technician came about two weeks later and replaced the roller arm bushings on the right side of the machine. Three weeks later the squeak happened again and the pedal started tilting again. More parts were ordered and delivered and another tech visit was scheduled with more machine down-time. During the next visit the tech put a little downward pressure on the main axle on the elliptical and it sheared right off - a one-inch piece of solid metal just snapped. This had been the problem all along. Another delay in getting new parts and another tech visit (this one paid by me because I had now passed the one-year free labor period - grrrrr!). The machine seemed OK but about 10 days later a dreadful noise came from within the front shield area. I gave up, scrapped this 15-month-old piece of Epic junk and bought a good elliptical. Avoid Epic - it's all junk.