A guide to Choosing and Using Body Fat Calipers

If you're considering buying a set of body fat calipers you'll probably fall into one of two categories either you want to measure your own body fat percentage or you need to test other people.

If you simply want to measure your own body composition, a set of calipers may not be the best option for you. Firstly, nearly all body fat calipers require someone else to perform the test. If you think a friend or family member can help you out, think again

To obtain any sort of accuracy and consistency with most body fat calipers requires a skilled professional. Skinfolds are notoriously hard to locate precisely. And just a few millimeters out can compound to make a significant difference. There is one exception however

Accumeasure calipers are the only body fat calipers that allow you to test yourself. Research shows that they can be as accurate as other methods of body fat analysis and they are a less expensive alternative to body fat scales. If you just want to test yourself then click here for a review on Accumeasure. Onto the second scenario you want a set a calipers to test others, perhaps your clients. If this is the case body fat calipers are a more suitable choice than a set of scales. Here's why

Body fat calipers are more portable and more convenient to use in the field. You can pick up a set of calipers for under $30 that are reasonably accurate and of course, using calipers does far more for your credentials than a switching on a set of scales!

So are all calipers made equal? And just how reliable are they?

Getting the Most form Your Body Fat Calipers

Body fat calipers measure skinfolds to calculate how much subcutaneous fat (fat under the skin) a person has. The examiner then puts the skinfold measurements into an equation to predict body density and body fat percentage. And herein lies the first potential problem...

There are over 100 equations you could use. What's more...

Use the wrong one and body fat calipers become very unreliable at determining body fat percentage. Why are there over one hundred equations?

Each equation relates to different populations of people with different characteristics. Young people for example, store about one half of their body fat under the skin. As we age a greater proportion of our body fat is stored internally. So even if the skinfold measurements for a young and old person were exactly the same, their body fat percentage would still be considerably different. The point is

No equation has ever been written precisely for your client. So you'll never get truly accurate results. Body fat calipers used correctly are accurate to within 4% at best. Have a look at this real life example

John is one of those people everyone loves to hate... he's naturally very lean. John had his body fat tested in laboratory conditions using professional body fat calipers. Skinfolds were taken at 16 locations and each skinfold was measured 3 times by an experienced examiner. The results?

Take a look at the table below. The skinfold measurements were put into four different equations to calculate body fat percentage

See what a difference there can be? One of those equations is the most suitable for John because he is an athlete. Using an equation designed for the general population won't give John the most accurate results.

What is the best way to make certain you don't use the wrong equation?

Don't use any equation at all. Don't try and convert skinfolds into a body fat percentage. Instead just note down the skinfold measurements and monitor their change over time. If you really must have a number for body fat percentage then just use it as a benchmark for progress. Don't start comparing it with norms and standards.

There is another key ingredient for using body fat calipers successfully...

Research recommends that 50-100 tests are needed before an examiner can be classed as 'competent' with body fat calipers. And the tests should be carried out in research settings. No matter how fancy the diagrams are in the instruction manual a few centimeters, even millimeters out compounds to make a significant difference. How can you overcome this problem?

Find out the precise locations of each skinfold site. For example, the abdomen skinfold site is 1 inch to the right of the belly button so measure it with a ruler, don't guess! If the triceps site is midway between the tip of the shoulder and elbow, use a ruler to measure exactly halfway.

Your client won't thank you for it but mark each location with a felt pen. Once you've marked the locations measure each skinfold. Then measure them again and then a third time. Using the average of three readings will significantly increase your accuracy.

Choosing a Set of Calipers

Small inconsistencies compound into significant errors. This may seem like an insignificant point but they all add up. Having said that there is no need to buy the most expensive set... unless you want to.

Below is a list of suitable body fat calipers for testing other people. If you're a Health and Fitness professional any of these will make an excellent addition to your kit bag. Clicking on a link will take you to Bodytrends. They are far and away the best online store for body fat calipers 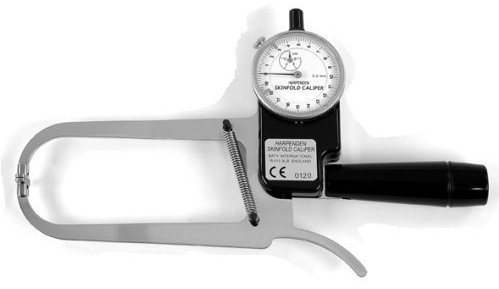 Harpenden Skinfold Caliper
The Harpenden is the most accurate skinfold caliper made. It has been the standard research caliper for many years. Virtually all the data and equations relating skinfold thickness to body fat are based on studies done with the Harpenden. The gold standard but expensive. 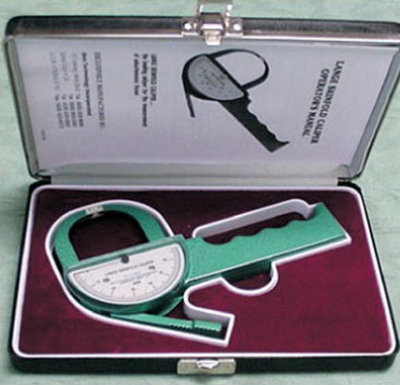 Lange Skin Fold Caliper
This is the best selling of the higher priced body fat calipers. It has been manufactured since 1962 and is widely used in schools, colleges and fitness centers. Accuracy rivals the Harpenden and Lafyette but the Lange is significantly cheaper. This the best choice for exercise professionals and commercial fitness centers.

Slim Guide Skinfold Caliper
Costs a fraction of the above body fat calipers but will still produce results that are acceptable. It is the only low cost caliper accurate enough to be used for professional measurements and is the most widely used caliper in the world. Good starting caliper if you're on a tight budget.