The physical fitness market is inundated with products that are touted as being revolutionary for helping people lose weight and tone up their bodies. One such product is the iGallop. As you might guess from its name, the iGallop is an exercise machine that simulates horseback riding. The main premise of the equipment is that it can help you tone crucial areas of the body, including the abdominal muscles, hips, and thighs with a simple gallop motion repeated over and over.

As mentioned above, the iGallop is designed to mimic riding a horse. To exercise on the machine you sit on the heavily padded seat, select one of the four speed settings, and press the start button. For the next 15 minutes the machine moves in a side-to-side and circular motion according to your speed setting. To extend the length of time that the machine operates, you simply press the Start button again. You have the option of folding your arms in front of you, performing arm exercises while you ride the machine, or placing your hands on the support bar located in front of the equipment. The product is advertised as a zero-impact product, but is considered unsuitable for people with neck or back problems. Pregnant women are also advised against using the iGallop.

The really good news about the iGallop is that people of varying physical levels can use the product. The basic operation of the equipment is to place your hands on your hips while the machine operates automatically. You can easily perform other exercises, such as the bicycle (sit back on the seat and move your legs in the air as though you were riding a bicycle), while the machine operates. If you're just starting to exercise or it's been a while since you've exercised, this is a good level to stay at until you can perform the exercises while remaining sturdy on the seat. Then, you can progress to intermediate and advanced level exercises. 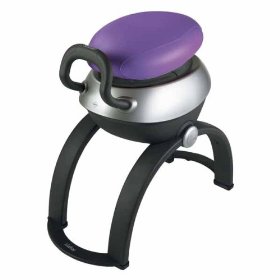 You can easily watch television while you use the iGallop or watch the DVD that ships with the equipment. The DVD includes a demonstration of the various exercises you can perform using the iGallop. The product also ships with an instructional booklet that shows you how to use the machine to work different muscles.

People who use the iGallop are generally satisfied with the equipment and contend that it is fun to use and that they have experienced changes in their physique. Users of the iGallop are also positive about the $400 price tag. There have been some complaints that the construction of the machine is less than satisfactory. After about a year of use, some people have reported that the equipment operated less efficiently. The good news is that an extended warranty is available.

OSIM, the company that manufactures the iGallop, is located in Singapore and has contributed an excess of 100 "healthy lifestyle products" for more than a decade. The company maintains partnerships with companies all over the world that distribute the iGallop.

Final Words: The iGallop scores points for being easy and fun to use. EER gives the product a thumbs-down because it is a better supplemental piece of equipment and not able to produce the toning results it claims on its own. There are plenty of other choices for your mid section found here.