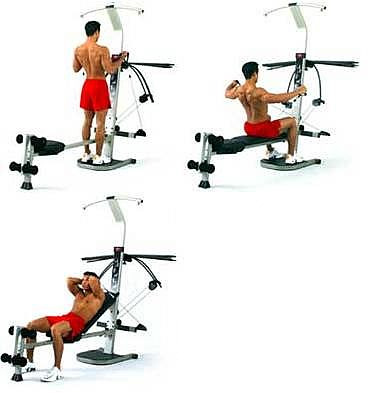 The Weider Crossbow, along with its main competitor the Bowflex, is taking the home gym market by storm. Compared to conventional multi gyms and free weights they have some notable advantages. For the uninitiated here's a quick summary of why the Crossbow is preferred by many to other forms of strength training equipment...

Traditional weight machines restrict range of movement. In effect you fit around the machine whereas free weights fit around you. The Weider Crossbow is promoted as simulating a feel of free weights and customer testimonials seem to back this up. So why not just go for free weights in the first place?

Firstly, they are not ideal if you're training alone without an experienced spotter. Secondly they take up so much room. Thirdly, they are inconvenient requiring you to constantly change plates and collars between sets and exercises. Finally, hundreds of pounds of cast iron isn't cheap and once you've bought a decent bench the cost is no different.

Probably the most important benefit of the Weider Crossbow compared to multi gyms or indeed free weights is the space it saves. Few if any conventional home gyms can be folded like the Crossbow. As such you must permanently set aside at least a 10 feet square space for a typical multi station gym, more for free weights.

In terms of price the Weider Crossbow compares favorably with most conventional home gyms. A typical, conventional multi gym will set you back about $600 and will cost another $150 to ship (offline the same gym might cost $700 so there's little difference at the end of the day).

At about $600 the Weider Crossbow is roughly the same price but offers far more exercises, more resistance plus the other advantages mentioned above.

The Crossbow's main competitor however is a different story. The Bowflex will set you back over $1000 if want to be able to do all the same exercises. There seems to be little difference between the two and the warranties are good on both machines.

Independent customer reviews for the Weider Crossbow are very encouraging. Users give the gym top marks and there is little buyer's remorse. Independent reviews for the Bowflex are also generally very good and the only common complaint is the cost.

At nearly half the price, Weider's Crossbow is well placed as the more affordable alternative and comes highly recommended...

The best place to get the Weider Crossbow is from one of the major online sports outlets like The Sports Authority. Prices don't vary between stores much at all so stick to a well established site that are geared to higher end sales...

Since last reviewed, the Weider has expanded its lineup a couple different models which are based on the same idea. If your willing to spend a little extra I think it is going to be worth it but the new Max looks like a good buy as well.